Responsible Travel Policy
Download our new 2022-2023 brochure here ..
'Fez Travel '
OR
Email us for a hardcopy of our brochure brochure@feztravel.com

Did you know?
The seven churches mentioned in the Book of Revelation are all found in Turkey: Ephesus, Smyrna, Pergamum, Thyatira, Sardis, Philadelphia and Laodicea.
Latest information on Coronavirus (COVID-19) ...here

"The tour guide was delightful and full of good information. Liked the small amount of people in the group. All of the sights were fascinating and more than I expected. The hotels were nice.."
Tressa H (Viator) Rated 4 out of 5. Reviewed 01-Apr-13

This 11 day tour, starts from Athens, Greece, and ends at Belgrade, Serbia, and also visits Albania, Bosnia and Herzegovina, Croatia and Montenegro.

Welcome to Athens, upon your arrival, you will be welcomed and transferred to your hotel. The remainder of your day is free to explore.

After breakfast, our tour concludes with a transfer to Belgrade airport.

Please Note :
1. Group Size : Minimum Group Size of 2. Maximum Group Size of 20.
2. Age : Minimum Age of 8. Whilst there is no Maximum Age set it is assumed the customer is fit enough to take part in the activity or tour. Health documents may be requested.
3. Single travellers are obliged to pay Single Supplement and will have the hotel room to themselves.
4. In Greece the Hellenic National Tourism Organization has decided on a residence fee to be applied on hotel accommodation from 01/01/2018. The fees applied will be EUR 1.50 for 3* hotels, EUR 3.00 for 4* hotels and EUR 4.00 for 5* hotels, per room, per night and are not included in the tour price. This tax must be paid by the guests directly to the hotel before the end of the stay.
5. Meteora Dress Code: The monasteries have a strict dress code. To enter the monasteries of Meteora you have to adhere to the following rules: Women will need to wear a long skirt, dress or sarong, it's not enough to keep the knees covered, so no trousers or shorts. Men must wear long pants. Sleeveless shirts are not allowed. Please make sure to have appropriate clothing before visiting the monasteries. 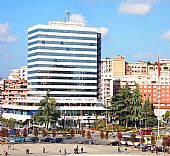